Beyond It! with Ashley Thomas: Creating Change

When one thinks about it these two words are power-packed.  Some people hate change and become quite upset and anxious over this concept.  Others love change as it adds to the adventure of life.  When mobility limits are part of daily living, the consistency of certain things aids in the efficiency of daily interactions, giving courage and comfort to engage.  Some call these ADA ideas.

The Americans with Disabilities Act (ADA) became law in 1990. The ADA is a civil rights law that prohibits discrimination against individuals with disabilities in all areas of public life, including jobs, schools, transportation, and all public and private places that are open to the general public. The purpose of the law is to make sure that people with disabilities have the same rights and opportunities as everyone else. I will share some of this victory as part of my personal journey in daily living.  Hold-on and read through.  Victories take time and I want to share how you, too, can have victories.

This winter I took a Bee Keeping class on Wednesday nights to enrich my understanding and give joy to my soul, because, by nature, I am a country gal.  It had been a long day with work, that started with a 7:30am first meeting on January 16th, 2019.  As I forged through my day peppered with meetings, my last one was in downtown Durham. I decided to stop by Cocoa Cinnamon on the corner of Geer St. to have a snack and coffee. I needed the caffeine to get through my bee keeping class that started at 6:30pm. I was determined to not miss a class.

So I parked in a space that was not compliant with ADA in that there was a Blue wheelchair sign, placed in a big flowerpot, but it was missing the “GS 20-37-6”, the General Statute that represents the law.  I parked, got my wheelchair out, (a real effort at this point in the day), went up the accessible ramp, opened the door to go inside, and ordered my coffee and snack.  The gal behind the counter was very kind and offered to bring coffee to me.  I found a space that I backed into, got my phone out to respond to emails, and was kindly served my coffee.  I sipped in the lovely coffee and took a moment to enjoy the warm, energizing drink, sitting in with a crowd, doing the same thing I was doing.

I began my email work, only to have the lovely gal at the counter ask out loud, “Who has the burgundy van, with plate number….?”  I raised my hand, and said it was mine.  She came over to me, apologetically and said a food truck had to get to my space and I am embarrassed to ask you to move, but you need to move.”  Her approach was great.  She clearly was following the instruction of her manager but was not happy to have to ask me to move.  I asked her to put my coffee in a to-go cup and asked if she would bring it to me in my van.  She quickly said, I did not have to leave, just move your van.  Another customer quickly saw the issue and said he would move.  I thanked him for his kindness, but, said, I was too tired to get my chair in and out again. I would drink my coffee in my van outside the building that I was to have my class in.  She helped me by bringing my coffee outside to the van.  Apologizing again.

I looked at the sign, that was not compliant, and saw that there was no enforcement ability as the GS numbers were not attached.  I drove to my class at the exchange office nearby, and called the police to report the situation.  I asked if an officer would come by and let the management know that they needed a true ADA compliant parking space.  The police officer did stop and made mention that the parking was not compliant.  He was concerned as he did not understand that either.  We pondered who was the right group within the city to share the concern.

That night I wrote a post on FB, asking my Durham friends to boycott the location as it was not wheelchair friendly.  It garnished several responses of sadness and words of apology, and support.

On January 30th, I got an email from one of the owners of the Cocoa Cinnamon through messenger.  He apologized and said he would give a full refund of my bill, and a request to meet in order to understand how to make the parking accessible. He was genuine and generous; a reaction that is rarely given when an access concerns are voiced. I agreed to meet him and his other partner at the restaurant on February 14th to talk about what is compliant and wheelchair friendly.  I emailed the Chief Building Inspector of Durham, inviting him to come as I wanted to understand how this non ADA parking issue happened.  I also had a colleague go with me as an outside ear, witness, to teach how to advocate, and hold me accountable to kindness.

When I arrived on February 14th, I was warmly met by both owners, with a handshake, and a genuine desire to learn.  I too learned.  I learned that one of the owner’s had rheumatoid arthritis, and there were days he could not get out of bed. The ramp was put on as he wanted all to be able to access his place.  It was not “required” with the redesign.  The second owner has a young daughter with mild Cerebral Palsy.  His desire was for all to access too.  In truth, they both thought the signs sitting in plant pots were compliant as they had to go through inspection process when they renovated. They trusted the process to guide.

Where was the breakdown? When the Chief Inspector arrived, he was friendly as well.  Upon hearing the truth that was told, he shared that he too was a person with a disability, narcolepsy.  He went on to explain that the building was only a 20% change, thus, did not meet the requirements that demanded total upfit to ADA compliance.  After a long discussion, I asked the Chief Inspector if in their forms, they asked, “Do you want to become compliant with ADA standards?”  He answered, “No”.  The next question was, “Could he make that part of the inspection process?“

I stopped by Cocoa Cinnamon in May to see if the parking correction had been completed. I was excited to share of the great victory of change through compliance, education, and bigger impact.  The walkway was painted, the aisle lines were in, but, no sign with the General Statue yet.  I sent an email to the two owners to say I saw they were getting the parking fixed and that I would love to take a group photo and write this great story of impact.  They too were happy to share the story, but, wanted to wait until the sign was in.

I received a message that the sign was up!  A meeting was schedule on June 25th to celebrate success, change, and new beginnings.  Leon generously offered coffee to all as well as invited a guest to the table.  After celebrating the great work and photo op, I was introduced to a World class Badminton Coach at Triangle Badminton.  Leon kindly shared with him what I did at Bridge II Sports.  Then Leon shared that Triangle Badminton, would like to have adapted badminton, could we help?

What happened to the city inspector?  I will be doing a training for his team this fall.

This change started in January.  It took openness to look, share concerns, and to see change as good.  Change that would bring stability to those who need accessible parking, and, change that brings new opportunities for people with disabilities to play badminton!  Thank you, Leon, Rob, and Wyatt for your honesty, care, and willingness to see and make change.

Cocoa Cinnamon is my recommended place to enjoy a great cup of coffee with a friend, or to reboot as one is catching up on emails.  They get a 5-star rating! 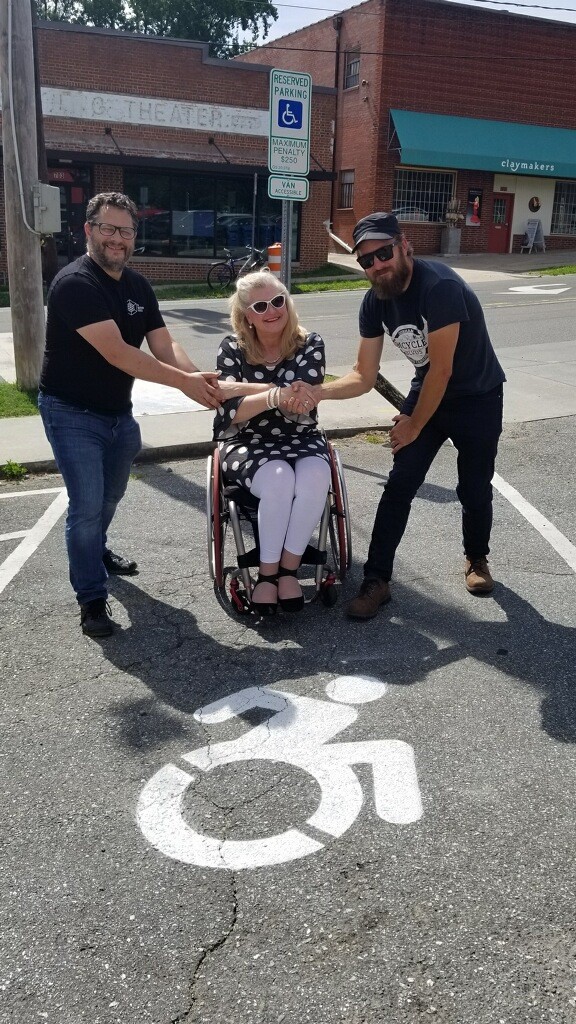