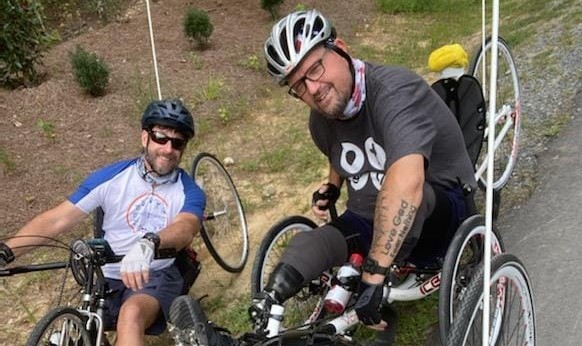 Wes and Tony on the trail

3o years ago Tony couldn’t have fathomed that he’d be feeling the rush of hitting hairpin turns at 20 miles per hour sitting 4 inches off the ground on 3 wheels–
with two prosthetic legs alongside his new crew of cycling buddies from Bridge II Sports.

As a self-professed ‘gym rat’ back in high school measuring in at 6’4″ and 225 pounds he thought he was “bulletproof”.
That changed when he was diagnosed with end-stage renal failure at the age of 20.  The next 25 years brought a cascade of ‘medical dominoes’- dialysis, a kidney transplant, cancer on his native kidney, several surgeries, and a lifelong need for immunosuppressants. All the while Tony continued to raise a family, work, take on mission trips, and stay active playing volleyball, racquetball and rollerblading with his wife.

During a month long mission trip to Papua New Guinea in his early 40s he developed a sore in between one of his toes that just wouldn’t heal. Doctors discovered severe calcification of his arteries and veins that was cutting off the blood supply to his lower legs. After all other options were exhausted, including hundreds of hours of hyperbaric oxygen therapy, Tony had his lower left leg amputated 4 and a half years ago, followed a year later by his right leg.

As is so true when disability enters life, there are questions that can only be answered by someone else that has been through it.

In a twist of fate Tony had first met Wes Hall way back in 1990. Tony was a freshman at UNC- Wilmington serving as a Young Life leader at Wes’ high school.  Wes had recently lost his leg to cancer.
(stay tuned: we are trying to dig up some old pictures of these two young guys 🙂 )

Their paths crossed a few times over the years but when Tony was faced with living his life after his amputations, he reconnected with Wes for support from someone that he knew “just knew”.

This connection grew even stronger after COVID-19 hit this year.  Tony was about to finish out his 2nd year of playing sled ice hockey when the season was canceled.  Hungry to be active but not sure what he could do- he reached out to Wes who was now the Director of Programs at Bridge II Sports–“I gotta get into something.”

Wes had just the ‘something’. Through a lot of trial and error on different types of cycles, they were able to get a BIIS recumbent foot-propelled trike set up perfectly for Tony.
“I never thought I’d be able to pedal with my legs…this is one of the reasons Wes is so awesome. He is very diligent and persistent to make things happen. He attacks stuff and figures out how to do it.”

Since starting cycling with BIIS, Tony hasn’t been able to stop.  He is averaging 50 miles a week and loving every bit of it.
“I’d be out every day but I have to be careful of over-training, being immunosuppressed.” On that note, Tony added that cycling really has been the perfect outlet during the pandemic.  It allows him to be active but also not get too near anyone to compromise his health.

On a recent socially-distanced ride with some fellow recumbent and hand cyclists, including Wes – the crew decided they needed a name.  Since both these styles of cycles sit low to the ground – The Bridge II Sports Lowriderz was a natural fit with a cool sound to it. The BIIS Lowriderz include all of our athletes that use handcycles or recumbent cycles.

Of course, all teams need a great logo. Tony has a knack for graphic design and volunteered. Wes has already added the trike inspired Lowriderz logo to the back of the new order of BIIS Cycling jerseys.

We are looking forward to seeing the BIIS Lowriderz and Tony continuing to push their limits out on the trail.  So thankful to Tony for helping them look good while they are at it and deepening that connection and identity as athletes. Never underestimate the power of a logo!

If you’ve ‘gotta get into something’ and need help finding that something contact Wes Hall at Bridge II Sports wesh@bridge2sports.org or 866-880-2742.

The original Lowriderz – Wes, Bruce, Michelle and Tony posing for a quick photo before masking up to hit the rest of the trail.